The Three Stooges were an American vaudeville and comedy team active from 1922 until 1970, best remembered for their 190 short subject films by Columbia Pictures. Their hallmark styles were physical farce and slapstick. ...The Stooges were often anti-heroical commentators on the class divisions and economic hardships of the Great Depression in the United States.

Two brief - videos of their work - making clear "their message" - are at: 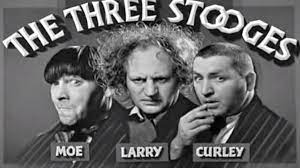 Ukraine has had significant conflict between pro-Russian and pro-Western factions in the 2000's.   Some examples of this are:

In November 2013, President Yanukovych did not sign the Ukraine–European Union Association Agreement and instead pursued closer ties with Russia.[53][54] This move sparked protests on the streets of Kyiv.  ... Following the violence, the Parliament turned against Yanukovych and on February 22 voted to remove him from power ... The conflict escalated rapidly, leading to the overthrow of the government of President Viktor Yanukovych and the setting up of a new government to replace it within a few days.[61] Yanukovych fled to Russia and is wanted in Ukraine for the killing of protesters.[62][63] Russia in particular holds that the transition was a "coup".[64][65][66]

...On February 2, 2021, a presidential decree banned the television broadcasting of the pro-Russian TV channels 112 Ukraine, NewsOne and ZIK.[97][98]
https://en.wikipedia.org/wiki/Modern_history_of_Ukraine
It should be obvious that because of actions of the Russian government in Crimea and part of Ukraine as well as the rest of the major conflict(s) and action(s) - that:
"democracy" and "right and wrong" - depends upon which side one is on in this clearly two sided conflict.
The entire western border of Russia consists of NATO members, with the sole exception being Ukraine.   Vladimir Putin is an autocratic leader of Russia.  Russia's relative power in the world has lessened significantly in recent decades.    Putin has tried to maintain power and strength through his relationship with Donald Trump.   He also appears to be trying to use cyberspace as a weapon against others.   He is also trying to maintain and build ties with the Chinese Government.
A large issue for Vladimir Putin is the desire for the current Ukrainian leadership to build economic ties with the west and militarily join NATO.   Prior to the major invasion of Ukraine, Putin insisted that the bottom line was that it was unacceptable for Ukraine to join NATO.
Putin's demand - was denied - and Never Discussed - by Joe Biden!
Let's label Vladimir Putin and Russia - for the moment as:
Moe
or:  "Stooge 1"
---

Now let's move ahead towards #2!

It is hard to know where to start.   Joe Biden - the great man - who cares for all of us?
When has Biden really seriously supported efforts to deal with:  racism, classism and sexism - and related issues?    When has our leadership and country seemed to seriously care - similarly?
What are we doing, for example, to help the people of Mexico and Central America - so their poor people won't seek to come to the U.S. - for economic reasons?
What are we doing to end systemic racism (as well as other important "isms")?
Take your pick:
1. Housing
2. Education
3. Jobs
4. Healthcare
5. Police/Incarceration
Why is a Minneapolis former police officer - a "victim" - and sentenced to what will be 16 months in prison for killing a man she was trying to taser?
Why was a Stanford University swimmer given leniency for sexually assaulting a woman who was unconscious -  because he was from a good family?
It should be noted that Biden and the U.S. (government) sometimes - talks the talk.  Rarely, though do they walk the walk.    Appointing some progressive Black Women doesn't stop white male power over BIPOC People and white women.
Proclamations and token appointments are nice, but consistent significant money and people power - is much more important!
Joe Biden - January 16, 2001 - Nomination Hearing for John Ashcroft to be U.S. Attorney General:

Forty years ago, a contentious battle over racial justice gripped Capitol Hill, pitting the nation’s lone African American senator against the man who would one day become Barack Obama’s vice president. The issue was school busing, a plan to transport white and black students out of their

neighborhoods to better integrate schools—and at the time the most explosive issue on the national agenda.

Ed Brooke, a Massachusetts Republican, was the first black senator ever to be popularly elected; Joe Biden was a freshman Democratic senator from Delaware. By 1975, both had compiled liberal voting records. But that year, Biden sided with conservatives and sponsored a major anti-busing amendment. The fierce debate that followed not only fractured the Senate’s bloc of liberals, it also signified a more wide-ranging political phenomenon: As white voters around the country—especially in the North—objected to sweeping desegregation plans then coming into practice, liberal leaders retreated from robust integration policies.

Biden stated,I believe in 1975, that we needed to come up with a new strategy to replace mandated busing to integrate our public schools.   I challenge you to tell me What he's come up with over the past 46+ years as a "Civil Rights Advocate"

I have heard very little about Joe Biden pushing for democracy in Saudi Arabia - a key U.S. ally.

I have heard Nothing of Joe Biden pushing for democracy for Palestinians in Israel, the West Bank and Gaza?

"Democracy" appears to be a "selective value".

When the U.S. assassinates an "Islamist Terrorist" in the Middle East that is "different" - because - well it is different - because we were threatened by him.

Is Russia wrong to feel threatened by the idea of Ukraine joining NATO?

Strangely -  after pushing for Ukraine joining NATO - suddenly - after the recent invasion - we don't want Ukraine being in  NATO now.

Well, if Ukraine is in NATO, U.S. troops will be required to be an active part of the current war - a membership obligation we have to defend all NATO allies.

When have we been "great"?
Driving Native People off of their lands?
Having large estates and plantations with many enslaved or virtually enslaved workers?
"Freeing" the slaves - while making a mockery of the equality of Black People and others lacking significant systemic power.
Hitler - used the example of how Black People were treated in Texas at and near U.S. military bases - as an inspiration and justification for his - extermination plans for Jews, gypsies, Gay/lesbians, individuals with "special needs" etc.
I'm not even going to get started on the "bright ideas" put for by Republicans and "the right" - related to January 6th, Covid, voting rights and similar.   I would note - however that there is a bit or racism as well as a lack of concern for others - in general.  "Stoogedom" - might be a little over-estimation - of the levels of dialog and action put forth here in recent years.
I could say much more - but I think it is clear that Joe Biden and our U.S. leadership - really do quality very nicely as Larry - Stooge #2
---
But who, you may ask is really - Curley - Stooge #3 ???
I'm sorry - but I think that that answer is obvious!
The third Stooge - is you - me - and most of us - here in the U.S.!
We say that we want change.
We want "those people" to change, though.
We want Black People to bring themselves up by their boot straps.
We want our schools to be "safe"- and "those people" - make them unsafe.
We live in a democracy - of course!   Our democracy requires 60 senators - to agree on most everything of any substance.
Women - don't have the right to control their own bodies - that is a violation of "the right to life".
Mothers - you have a responsibility to only have children when you can afford to raise them without government assistance.
Childcare - costs - what the market shows it is worth.
If you want some ideas- related to economics - I suggest:
Joseph Stiglitz - People, Power, and Profits: Progressive Capitalism for an Age of Discontent .
If you want some ideas related to racism and sports - I suggest:
John Feinstein - Raise a Fist, Take a Knee: Race and the Illusion of Progress in Modern Sports
A strong case for how we can leave our Stoogedom is most visible in -
Heather McGhee's - The Sum of Us: What Racism Costs Everyone and How We can Prosper Together
or
Alicia Garza's -  The Purpose of Power: How We Come Together When We Fall Apart
or
Richard Rothstein's - The Color of Law: A Forgotten History of How our Government Segregated America
---
I like to believe that someday - we will wake up - do the work - and end our stories - of being Stooges!
POLITICAL