Several days ago I wore my new - wonderful - Minnie Mouse - T-Shirt.   My partner and I both love the shirt! 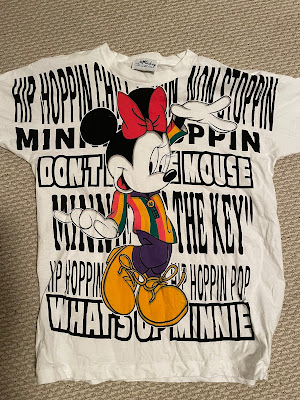 Now — Minnie — certainly does not appear as the image of being “tough” or quite have the “Marilyn Monroe” or Kardashian look — or various — “neutral” looks, I will admit. My neighbor — saw it and immediately both had a strange facial expression and a homophobic response.

Does Minnie help make me a #?*@&^ ?
When I say:  "My doctor..."  or "My lawyer..."  or similar - is your image of a man?
Similarly, does: "My granddaughter's teacher..."  or "The nurse..." - imply a woman.
What are the qualifications or requirements to be the various things we often see around us such as "the obnoxious one",  "the frail person", "the assertive ...", "the caring ..." or ?
I wear quite a few shirts that support gay/lesbian/trans equality.  Does that make me a #?*@&^?
It's very strange!   When a woman or girl - wears something that has a male image, what do we think of her or they?
When a Queer identified person displays an image of a Cisgendered man - does that suddenly make them - "passing as 'normal' " (e.g. male, het)?
Why does it have to be so scary if I might be Queer?
I know why - but it still is bizarre and strange!
I used to wear pink shirts - when they were taboo - for men.
The (generic) children's book character can be described using female pronouns and still be "gender neutral" - but rarely is.
My son carries his mother's last name - not mine.
When I married B - I didn't take her last name as my new last name!   Is there something wrong with that?
I know I'm a weirdo - but I really think that we - fail to seriously look at gender - and our words and our visual images - and that our failures here help us continue to tolerate and accept sexism and homo/trans/lesbian phobias.
PERSONAL POLITICAL