December 28, 2019
Today I was lucky to attend the 18th Annual MAS-ICNA Convention in Chicago.   The Convention was sponsored by the Muslim American Society (MAS).

It was interesting to be part of a tiny minority as a white Jewish man among 25,000 mostly Muslim people, a significant majority of whom were People of Color.   Muslim people are very different from "mainstream Americans" in that the skin color of individual people seems to be of no relevance to how they relate to others within their community.

This was my second recent experience being among mostly Muslim people.   Again people were uniformly very nice and accepting.   I would guess that 60-65% of the people were female.   Roughly 80% of the women had their heads covered.    Where there were five women together, often one would not have her head covered.

The most fascinating workshop I went to was entitled "Inclusive or Exclusive".   Abrar Esam Omeish is an incredibly intelligent, perceptive young lady!


Ms. Omeish was recently elected to the School Board in Fairfax, Virginia.   She spoke very rapidly clearly explaining how as a good Muslim she could find common ground with others who were different from her such as being gay/lesbian and work together.

Suhaib Webb ably complemented Ms. Omeish!    He is an Iman with a deep understanding of the Muslim faith.   He carefully explained a lot of doctrine and its significance in very understandable ways.

While I certainly missed some of what was said, both because of my lack of knowledge about the Muslim faith and because the speakers both spoke so rapidly, I heard a lot of impressive explanations of various things.   Both speakers stressed how Islam can help one understand various things one experiences in life and go in paths that are both supportive of the religion and ethically right.

After lunch I went to a workshop for men (and boys) entitled: "Modern Masculinity Issues, Challenges, and Opportunities".    Kifah Mustapha explained a lot about Islam from the religious side of things, using his knowledge as an Iman capably. 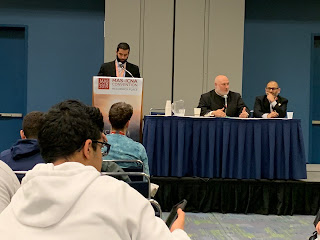 Nadeem Siddiqi spoke most clearly and effectively as to how being "masculine" within Islam required one to not be a traditional macho man, but rather to be in touch within one's emotions, and meaningfully connected to one's family.

I had problems with the "toleration" of homosexuality that was essentially equating accepting similarly a man who might drink alcohol or have non-marital sex with a gay/lesbian person.

After the workshop I had a great discussion with two young men who have created P.A.M. (Palestinian American Muslims) on Facebook and Instagram at:  @POLITICALAMERICANMATTERS and on Twitter at: POLITICALMUSLIM.    I really appreciate the kindness and insights that they both had!

At one point when I was looking at the booths and displays I saw the booth for the Palestinian Students Scholarship Fund (PSSF).   I cried a lot, feeling shame for what is done in my name as a Jew in crushing or attempting to kill or destroy the Palestinian People in greater Israel-Palestine.   I am proud to be Jewish!   I'm ashamed of how my fellow Jews, together with many non-Jews, support and help make possible the continual attack upon the Palestinian People.   I talked at length with a coordinator of the Fund and he was most welcoming and accepting.   He was clear that he was not in any way resenting Jews (as such).   He was clear about how there had been meaningful relationships between Jews and Palestinians in the past.   It was most moving to connect briefly!

I began and ended my day with major presentations that included Rabbi Michael Davis that focused upon cooperation between people of different faiths and backgrounds.   Both sessions were helpful.

It was a great experience!
POLITICAL REVIEWS