My Name is Rachel Corrie

March 22, 2019
Rachel Aliene Corrie (April 10, 1979 – March 16, 2003) was an American activist and diarist.[1][2] She was a member of a pro-Palestinian group called the International Solidarity Movement (ISM).[3] She was killed by an Israel Defense Forces (IDF) armored bulldozer in a combat zone in Rafah, in the southern part of the Gaza Strip, under contested circumstances[2][4] during the height of the second Palestinian intifada.[5]
She had gone to Gaza as part of her senior-year college assignment to connect her home town with Rafah in a sister cities project.[6] While there, she had engaged with other International Solidarity Movement (ISM) activists in efforts to prevent the Israeli army's demolition of Palestinian houses.  [2][7][8] According to the Israeli authorities the demolitions were carried out to eliminate weapons-smuggling tunnels.[2] According to human rights groups the demolitions were collective punishment.[2]
Less than two months after her arrival,[6] on March 16, 2003, Corrie was killed during an Israeli military operation after a three-hour confrontation between Israeli soldiers operating two bulldozers and eight ISM activists.[4][9]
The Den Theatre's production of My Name is Rachel Corrie brought me to tears.   A single actress brought to life the insanity of the oppression Palestinians face every minute of every day.   It also clearly showed  the crazy, but beautiful life of a young adult who gave her life in what now seems like a most meaningful way.
Rachel Corrie today brings to mind the "insanity" of Congresswoman Ilhan Omar's efforts to push for peace with justice for the Palestinians.   She is seemingly labeled both "crazy" and "anti-semitic" when her "insanity" is seeking a just world, fighting the craziness of the Palestinian's plight.  (Her "anti-semitism" is a mirage, masking the oppression the purported victims, in distorted fashion, hoist upon us in a gruesome way, every day.)
I think of the words of a former roommate, now Israeli, who has the privilege to tell me that the Palestinians aren't ready for a peace which the Israelis want; a gross distortion of the horrific reality.  He can dislike the excesses of the Netanyahu government, while more and more people needlessly die.
The play used the words of Rachel Corrie to expose so, so much in a most meaningful way.   It was very powerful, playing upon my emotions.     Rachel Corrie was an incredible hero!
She was also, as her father Craig Corrie noted one who lived as: "a messy, skinny, Dali-loving, list-making, chain-smoker, with a passion for the music of Pat Benetar."   The play's notes continue: "Perhaps it is through this ordinary and relatable version of Rachel that I find the most inspiration.  Rachel teaches us that we do not have to be extraordinary to act".
My Name is Rachel Corrie resonated with me in a very deep way.   The actress portraying her was so profoundly human in her portrayal, and such a mixture of the serious and the silly.   I could not laugh with the humor, feeling the pain of her needless death throughout the play.   Obviously, my emotions seize me in a way that the other audience members felt in a different way.
I can not forget.   While I can not feel the pain the Palestinians face, it does move me at a deep level.   This small theater production is very, very effective.   The sparse stage set is fitting, showing both the simpleness of what was produced so effectively, and how messy it all is. 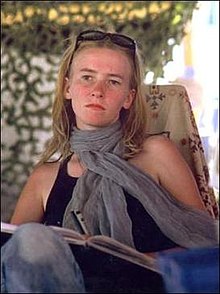 (same source)
The "real" Rachel Corrie was a wonderful, flawed perhaps, individual who became much more with her needless death.   Fortunately - few, if any other witnesses to the brutality, have died.   The Palestinians lack this "choice".
Craig and Cindy Corrie have dedicated their lives to the memory of their daughter through their work since her death with:  The Rachel Corrie Foundation .
My Name Is Rachel Corrie is a play based on the diaries and emails of activist Rachel Corrie, who was killed by an Israeli soldier when she was aged 23.[1] It was jointly edited by journalist Katharine Viner and actor Alan Rickman who also directed it.
The small production at the Den Theatre of the Jacaranda Collective in Chicago is an excellent portrayal of the story of Rachel Corrie's life.   The play was difficult, but very meaningful for me to watch last night.  After the play ended, I walked away, alone, needing a few minutes to just take in my feelings.