Zoey Settling In - 19 Days With Us 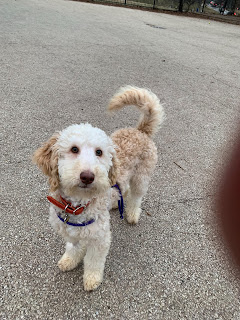 Zoey is settling in nicely with us!    Her housebreaking is going well.   She hasn't had an accident in over a week. 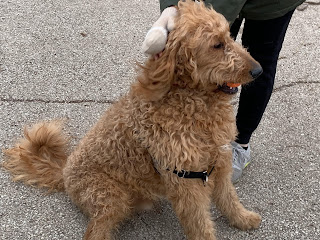 She loves going to Puptown - our wonderful dog park.     She was very, very funny there today.   She played with a four month old Goldendoodle puppy who was bigger than she is.   Zoey was dominant, a rarity for her.   At the same time, each pup asserted themselves with barks at the other, showing in an amusing way what they wanted. 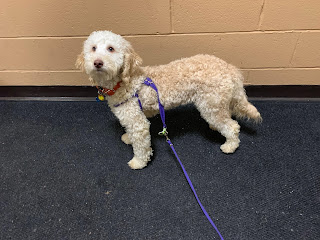 Zoey still has remnants of her former life.   I can't imagine how the breeder could have done a much worse job in preparing her for life away from them.  I wonder if she was sold to someone who returned her.

Zoey has a timedness, reacting to noises being scared.    She is gaining confidence as she experiences more in her life.   She has had two days at the Bark Bark Club, where she gets a lot of quality time with others dogs.

Zoey loves anything that is moving around outside.   A wrapper blowing in the wind is most exciting for her.   Sticks and balls are most welcome.   She is learning to fetch.

We are very happy with our young girl.   She is learning to sit (slowly learning) on command.   She will sit down at corners without any command, getting up when I release her.   She comes well to the "touch" command.   Zoey is a smart young-un! 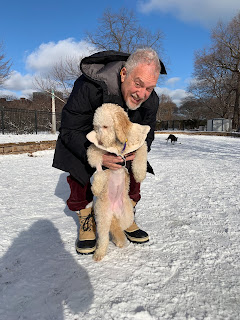