December 29, 2018
We are just concluding a most wonderful vacation to South Florida!   B has totally let go of her work 99+% of the time, getting a much, much needed rest!   For me it has been quality time with B and a lot of mostly warm memories of a very nice time we've shared in two places we very much enjoy visiting.

Our rental car was an Audi Q3, for me a most luxurious smaller car that I very much enjoyed driving.  It was easy to park, had excellent power, was comfortable and smooth; simply a great car.

Key West was simply delightful!   We stayed at a relatively small place at 408 Eaton Street, by the (only) movie theater, half a block off of Duval Street (the main touristy street in town).   It was a quiet, peaceful place;  a great place to start our trip at. 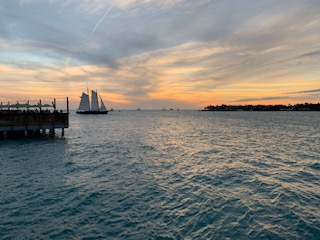 B slept late and I was up early.   Two evenings we went to drag shows.   Bourbon 801 was moderately ok, but nothing to write about.   Aqua was wonderful, a delightful time for both of us.  See my separate blog entry for more detail on Aqua.

Key West is about enjoying the relaxed ambience.  It is quite easy to meet some of the locals in some  bars.    It is fun to people watch, particularly along Duval Street.    There were a lot of families, couples and some teenagers and early 20's people enjoying themselves.   One can drink along the street and people drank quite a bit.   The sometimes "cool" weather of around 68-70 early in our trip was relaxing.    Key West has many old, beautiful houses. 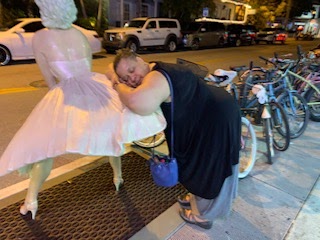 We went on a trolley tour of the town which showed us a lot that we didn't see much more of.    We ate some excellent food with a lot of conch fritters and too much ice cream (oh, my waistline).   Our dinner by the water, with hardly anyone else eating at the time, was wonderful, as was another meal where we made a last minute reservation.  At the latter restaurant (outdoors) a neighboring table had a snotty woman with her 4 little dogs of an elite breed, barking occasionally at another dog.

We had a pleasant visit to a clothing optional bar on the top of a three story building.  I was not "nude", having my socks on.    One other man was nude and B was partially clothed.   It was amusing watching a 40ish woman in her two piece suit, pulling it at times to ensure that it covered a larger part of her stomach area (making it obvious that she'd not shed the suit).  At the bar a regular seemingly sexually  harassed the (female) bartender, commenting a lot upon her ass, explaining to B when she questioned him that he did this all the time (she accepted it silently).   5-8 or so others sat at the bar,

We got some good deals on some beachish clothing.   I enjoyed walking one morning through the Truman annex, a distinct, interesting neighborhood.   It was nice to have both Christmas eve and day in a place that largely didn't shut down, with plenty of visitors and some locals out and about.   B was bothered by there being "too many Russians" .  I found it amusing.   There were a lot of European tourists as well as plenty of people speaking Spanish.   There were a moderate number of Black tourists as well.

We left Key West for Miami Beach on Wednesday, driving the lovely drive through the Keys back to a seemingly "more real" world of Miami.   The traffic was moderately heavy, but moving;  the other direction had very heavy traffic.

Miami Beach was much different!   We stayed in a studio apartment across the street from the water in North Beach.    It was a nice place to stay.   There were many nearby restaurants including a number of Cuban ones which were quite good.   There was free street parking two blocks away.

I watched the first half of my Badgers beating The University of Miami in their bowl game.  It was strange being in a large room in the bar, with four large screen tv sets, and no one else watching any of them.  I came back to our apartment and discovered that the cable tv didn't include ESPN, so I missed the rest of the game, getting some updates on my computer.

We spent much of the evening doing some meaningful work together - which will be better explained in the likely blog entry to follow this one (in a few days).

We went to a Jewish deli; a nice meal.   Afterwards B drove through a very crowded South Beach and finally parked when we found a space.   She found the people watching boring.  I enjoyed it a lot.  Her drink cost $16!

We saw one notable individual, who displayed  a significant image (of ours) of the Miami Area.   She was probably in her 40's, wearing a somewhat skimpy bikini on her extremely bizarre body.    The influence of the plastic surgeon predominated.  She had very firm breasts which were simply Much Too Big for her body!    If I had to guess her "measurements" they would have been something along the line of:  48-26-37.   "Beautiful people" and being "showy" were common in Miami Beach.   We saw a few $200,000 plus cars, most notably a bright green Lamborghini.

On Friday we went to the Seaquarium which on the whole seemed dated and a little tacky.  We had a most wonderful time though doing Sea Trek.    We each wore wet suits and water moccasins and a large helmet which provided oxygen to us.   We climbed down a ladder 15 feet into a large tank (visible to the public) which contained some small sharks and a lot of fish.   With us were a woman and her daughter who was around 10 years old and two guides. 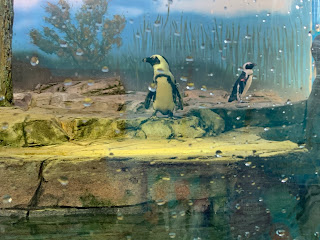 Going down the ladder was the only part of the experience which was challenging.    For the first minute in the water it felt very cold, but my body adapted very quickly.    Every two to four steps down I had to stop and consciously try to clear my ears, which were feeling a lot of pressure.   At one point near the bottom I had to rest for a couple of minutes letting my ears adjust.   The rest of the experience was all easy and a lot of fun!

I was the last of the four of us to get to the bottom of the tank.   Once I was there we began walking around the tank.   There were a lot of rays near us, sometimes rubbing up against us.   There were also a lot of fish and few small sharks.   Reaching out it was apparent that hand/eye coordination was not simple, like on shore.   Gradually I adjusted to the new environment, which was fascinating.   The guide used hand signals to communicate with us, some of which we had learned prior to coming down into the tank.

We stopped and a guide put some small fish pieces in the water and the rays and fish crowded in near us.   We touched what we could reach gently.   There were also boulders we needed to walk around.  Later on in the experience we each got to feed fish to the fish and rays which were around us.   My aches on my body were all entirely gone for the moment.   Walking was light and relaxing.  I moved my head slowly around to see around me.   At several points we got down towards the floor, bending knees and at one point I sat on the bottom. 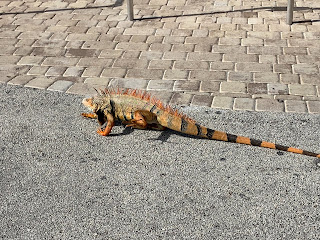 It is difficult to explain the wonder of the entire experience!   At the end when I climbed back up the steps, I was ready to go back down again.    It was simply magical!  I would love to do this again and no doubt, when given the opportunity.

As we drove back to Miami Beach, we got caught in very heavy traffic on an expressway crossing the bay.   Then we could see a motor cycle cop approaching on the right side of the road.   Two more motor cycle cops came up and loudly indicated that cars should move to the left, which some did.   They came up on a shoulder of the road.   Then they blocked the traffic at the light where we were stopped at.

Then, amazingly and disgustedly, nine buses came up to the intersection.   They followed one motor cyle cop as we all waited.   This was the University of Alabama football team and probably their band going to their hotel.   Today, Saturday, they play in an NCAA semi-final game against The University of Oklahoma in Miami.

As we move towards our departure today I am filled with happiness!   This has been a wonderful time for B and I.   She has gotten an important rest.  I have had a most pleasant time with her.