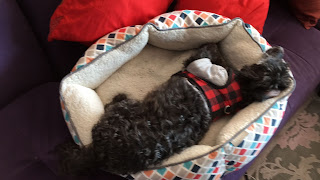 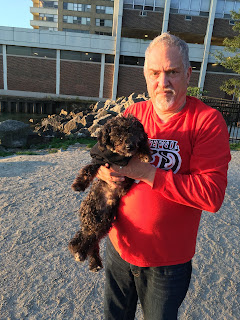 He is struggling.   He sleeps more and seems more sensitive to the pain that must be getting worse. 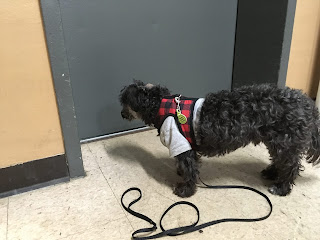 He still enjoys his time outside - going out- and coming back up the elevator. 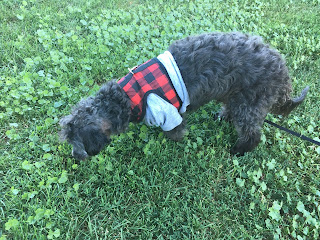 But it is obviously harder and harder for him. 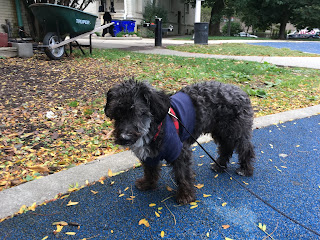 I don't want to let go, but soon I will have to. 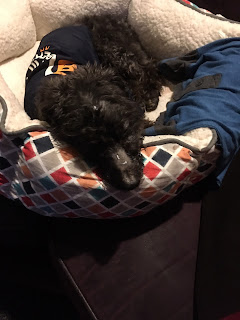 Bubba has been a Wonderful Companion! 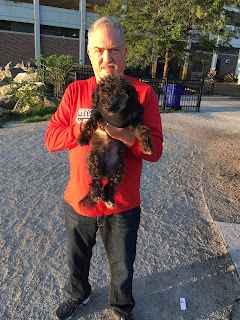 Bubba has helped us through rough times.   He has remained an optimist.   He gives a lot!   He is silly.   He reacts to other dogs - rarely - showing that he really likes to be with them, but then his furiously wagging tail - shows his deceptive holding back is a sham.   He loves attention, but on his own terms.

After I wrote the writing above I had to go out with my little boy - and we had a nice, very long (for recently) walk.   We first went to Berger Park.  Little Bubba - pooped (a little), peed a moderate amount, left is scent and was very much - together.  He wasn't totally sociable, with dogs that we passed, but he smelled some and tolerated being smelled some.

Bubba - barked ferociously - when I went into a store - leaving him looking in the front window.  He was so himself - so full of life, I was very optimistic - for the half hour or more that we were outside.

Across the street from our building - he wagged his tail strongly at first and socialized a little with a nice friend.   Gradually - they tolerated, but ignored each other.

We came back to our bed- with the - old-untouched food - and Bubba relaxed and slept.   After a good while - I made Bubba some fresh food.   He looked at the food and stood near it for a few minutes but didn't touch it.

My tears came again in waves!

I brought him back to the bed - with the food on the bed also.   He slept - some.  I gave him some (liquid) - supplement that should ease his pain a little at least.   He's licking his chops.

I'm scared that this is - the end - he needs to eat - tomorrow - if not this evening!  I'm heartbroken.