September 18, 2018
Mrs. Tatlock - was a wonderful, loving supportive woman.  I knew her both through her being the mother of my classmate Debby Tatlock-Smiley and as the wife and great supporter of her husband James Tatlock who was my track and cross-country coach at West Lafayette High School- and teacher in junior high school English as well as friend after I gave up sports before my senior year in high school (wanting to improve my musicianship  - on the French horn)  - attending a few track meets and talking with him after high school until his unfortunate death at a relatively young age.

I visited her when in WL - after college and always appreciated her warmth and support.

Today, September 24, 2018 - I drove to WL for Mrs. Tatlock's funeral.   Naively, I expected a large attendance - so many - have been so positively affected by Mary Tatlock.  There were about 36 people at the funeral. 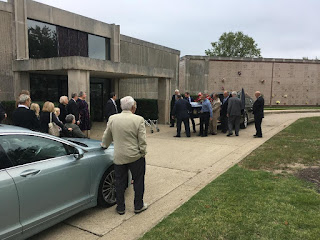 I appreciated the classmates who were there.  I was saddened that more weren't there.

Debby and Tom's children spoke most movingly.   It was wonderful to see the three great-grandchildren, the older which will remember Mary Tatlock for the rest of their lives.  It was most memorable that one of the campers from Camp Grace Bentley, where the Tatlocks had helped many special-needs children flourish, had driven from Michigan for the funeral.

It was very nice to have the opportunity to talk at Debby and Tom's house after the Memorial Garden brief closing especially to Debby and her cousin Gary. 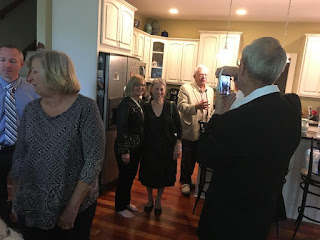 Mrs. Tatlock will long be remembered fondly by those who knew her.   She was a good person who shared a lot with those around her.

Mary Louise Blum Tatlock passed away at the age of 91 on September 17, 2018, at Westminster Village in West Lafayette.  She arrived as a late Valentine’s Day gift for her parents, George A. and Helen Reisig Blum, on February 15, 1927, in Monroe, MI.  She graduated from Monroe High School in 1944.   In high school, she was the Senior Class Vice-President. On November 3, 1945, in Monroe, she married James M. Tatlock of Oaktown.  Mary and Jim had met through one of Mary’s high school classmates who had met Jim while they both were attending Adrian College.

In the summer of 1947, Mary and Jim were recruited to work at Grace Bentley Camp for Crippled Children in Jeddo, MI.  They spent 4 summers there, and then they were away four summers due to the birth of their daughter Deborah in 1951.  In 1955, they returned to the camp with Jim as the director, and Mary serving as camp secretary, dietician, and luau cook.  Mary worked there 15 more summers until she began a full-time position in the Office of the Registrar at Purdue University.  She retired from Purdue in 1989.

In her younger days, Mary was involved as a Brownie and Girl Scout Leader, Room Mother, ceramics hobbyist, and fund raiser for various community charitable organizations.  In fact, she lost the diamond from her engagement ring while collecting door-to-door for the Heart Association one very snowy day.  She received the Lillian B. Stewart Award from the Tippecanoe Council of Girl Scouts in 1966.  Mary was also known for making her daughter’s Halloween costumes, play costumes, and dance dresses.  For several years in the 1960’s, as a very supportive wife of Coach Tatlock, she also regularly drove track and cross country participants and fans to out-of-town meets.  Until her health declined, Mary was an active member of Covenant Church.  In retirement she participated in the Purdue University Retirees Association and decorated the tables for their luncheons for several years.

Mary was preceded in death by her parents, her husband, and four of her siblings: Ruth Bedell, Allen Blum, Richard Blum, and Jean Doty. She is survived by her daughter, Debby Smiley (Tom), two grandchildren: Colleen Weinzapfel (Nick) of West Lafayette and Kirk Smiley (Lynne) of Indianapolis, three great-grandchildren, a sister Nancy Heiss of Novi, MI, a brother Loren Blum (Sandra) of Warren, MI, and sixteen nieces and nephews.

The family wishes to thank the Westminster Village staff and Franciscan Hospice for excellent care and compassion.
PERSONAL