March 04, 2019
The American Muslims For Palestine's Chicago Chapter Annual Dinner on March 3, 2019 was a most significant event for me.   I am a white, Jewish man, a member of Jewish Voice for Peace - Chicago, seeking a better world for Jews, Palestinians, Black people and others.

Most of my father's family lives in Israel.   My great-uncle S.Y. Agnon was Israel's first nobel laureate and is a beloved, well-known figure to (virtually) all Israeli Jews.   While I have opposed Israeli government policies towards Palestinians for over 30 years, only now am I really seriously trying to help bring about positive change. 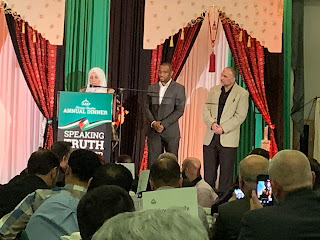 I came last evening hoping to hear inspiring words from Dr. Marc Lamont Hill, a man I greatly admire.   I experienced Dr. Hill's brilliance and warm heart far more than I could have hoped for.  I also was welcomed and loved by the warmth of many members of the greater Chicago Muslims for Palestine, who gave me far, far more than I could possibly have imagined.

Respect is important to me.   I was shown so much from so many people.  I am thankful!  I am blessed!

Dr. Marc Lamont Hill gave a powerful, impassioned speech!   He spoke directly to Palestinian Muslims.   His speech was far different than his incredible November 29, 2019 speech at the United Nations.  where he spoke to all of us.   While Dr. Hill did not speak directly to me as an American Jew, his words resonated in their inclusivity.   He explicity made clear that he was not speaking against Jews and white people.  Dr. Hill was very clear that Israeli governmental policy is the problem. 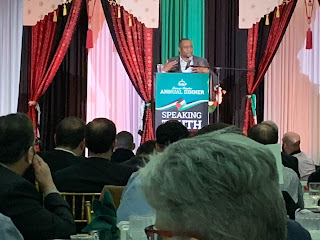 Dr. Hill's love for the Palestinian people was made very clear in the speech.   He also spoke strongly about the importance of both Black (and White) people supporting Palestinians and for Palestinians to support the struggles Black people including in cities like Chicago and Detroit.   His words were powerful, emphasizing non-violent struggles that may of necessity take more than our own lifetimes to succeed.

Equally significant to me was how well we were treated by both our hosts of American Muslims for Palestine and the others who attended the dinner.    Our hosts included both women and men of varying ages.    Many, if not most of the women's heads were covered.   I surmised that they were devout Muslims.   References to the Muslim religion were made throughout the presentation.

The people I met were far, far more caring of us than I could have imagined they would be.   We were shown to our table by several very helpful people.   Before the proceedings begun, a man came to our table thanking us as Jewish Voice for Peace Members for doing our work.    The American Muslims for Palestine Annual Report in its page on the Chicago Chapter included a picture showing Jewish Voice for Peace members demonstrating with Palestinians. 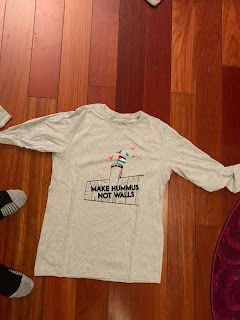 While many people we met were exceptional individuals, they were also wonderful in talking with us, in the varied parts of the presentation and in other ways .  This pointed clearly to the lies we face daily of the violent, not to be trusted Arabs, who allegedly prevent peace in Israel.   Yes, there are extremists who kill, but they are dwarfed by far more who seek a just, lasting peace.   It was very sad for me to hear that the "Volunteer for the Year" had never been in Palestine.   It was also uplifting to hear and feel the warmth and spirit of so many.

I am reminded of stories I've heard in the past.    I remember hearing of Palestinians in 1948, who warned neighboring Jews, preventing them from being killed.   I am reminded of the story one of my Israeli relatives told me circa 1980 in Jerusalem.   Her sister in Tel Aviv lived in a protected world where she spoke primarily German with her peers and English with her nieces and nephews and those younger.   Her husband and she had a fancy dress shop in Jerusalem dating back to well before the 1948 war.   She told me of how their customers had been both well off Palestinians and Jews who wanted custom made women's apparel.

My cousin told me of how in 1967, after the Six Day War, an older Arab man came to her shop, asking for her husband.   She told him that he had died.   The man wept.  She hadn't recognized him. He had been their porter in the store, until the War separated him,  putting him in then Jordanian run East Jerusalem.   My relative spoke admiringly of how this man insisted on carrying her bags when she went into the Old City until he died several years later.   He would not take any money from her.

I can not possibly understand the loss that Palestinians have faced for over 70 years losing their homeland.   I do admire their dignity in continuing the struggle for justice through (mostly) non-violent resistance.  I hope that a lasting, just peace will be achieved sooner, rather than later.